Drugs that produces a physiological response:

Estrogen- induces physiological response such as female characteristics due to presence of the female hormones.

Drugs that that can inhibit the growth of substances that cause infections:

Antibiotic, Aspirin, Penicillin – These drugs inhibit those substances that cause infection to relieve pain in the body.

We feel that morphine can be classified in both groups  because it can inhibit substances that cause infections by relieving pain and at the same time if morphine is taken in high dosages it can have bad side effects such as being overly high and aroused.

a) The herbal supplement manufacturers can put the details on the packaging.

b) Singapore has  HSA has Medicine act and guidelines for traditional medicinal materials that regulate the herbal medicine.

In addition, a traditional medicine unit was set up in the Ministry of Health in November 1995. Act 34, the TCM Practitioners Act of 2000 was also passed in 2000, to allow to government to approve or reject applications for TCM clinics’ registration.

Acetone is a weak acid that most polymers are able to dissolve in. Styrofoam packaging is held in a rigid shape due to its bonds between the section of the chains, holding the polymer in its rigid shape. This rigid shape does not efficiently pack the long-chain polymer, thus having many air-pockets. When the styrofoam is dissolved in acetone, the bonds holding the long-chain polymer in its rigid structure is broken, while the covalent bonds holding atoms in the long-chain polymer is still intact. The rigid stucture of the polymer collapse, condensing into an efficiently packed solid, eliminating the air pockets. Hence, the final solid styrofoam is much denser than before.

a) LDPE cannot be used because it does not have the strength needed.

b) Molecules of HDPE must line up so that they provide the strength required. HDPE is flexible enough to be successful in this application.

No. When a piece of plastic is stretched, the weak but extensive forces allows the molecules to slip pass one another allowing the plastic to stretch and ‘neck’.The molecule will rearranged itself parallel to the direction of force applied. This is plastic deformation. The deformation caused by the force on the plastic is irreversible. Further deformation will cause the structure to fracture. Paper is made of cellulose.  It has crystalline regions  as it is made up of a linear chain of glucose monomers. Therefore, the structure is more compact and it is not as flexible as a plastic bag. It does not have the characteristic of being able to deform plastically. Thus, it will fracture when the same puling force is applied to it.

(a) Non-toxic, Insoluble in bodily fluids, Not too rigid, Non-reactive in the body

Properties: non-toxic, allows oxygen to pass through to reach eyes, not too thick to provide comfort, shape of lenses needs to be similar enough to fit the eye contour

(c) Hard contact lenses are usually made of PMMA, a non-gas permeable and rigid plastic.

Soft contact lenses are usually made of silicon, which has breathable properties to allow oxygen to pass through and reach the eyes. Soft lenses generally makes the eyes more at ease as it is more flexible than the hard lenses.

1a) Coal-fired plants produces varying amounts of SO2 which reacts with oxygen molecules to form SO3, which acts in the formation of aerosols. Aerosols do not absorb sunlight and reflects it instead, thus leading to poor visibility.

1b) The natural pH of rainfall is between 5 to 6. Hence, if the average rainfall in Mammoth Cave National Park is 10 times more acidic than natural, then the pH of the rainfall in the park should be between 4 to 5.

2a,c) Reducing the electricity usage will decrease the power generated by power plants, thus decreasing the emissions of NOx and SOx.

e) purchasing locally produced food will reduce the need to import food and agricultural products, thus decreasing the emissions of aerosol by-products from the automobiles required for transportation.

3b) Observable properties generally associated with base are: changes of litmus colour from red to blue, slippery, and bitter taste

Observable properties generally associated with acids are: change of litmus colour from blue to red, sour taste, PH meter shows a reading of less than 7

Acid deposition originates inside Singapore as Singapore being an urban jungle, with its population being one of the most densely populated country in the world, results in a lot of human activities being carried out (e.g, transportation) which leads to high levels of atmospheric NO2 being produced. With the trace amounts of VOC that is present in the atmosphere, acid rain is produced.

Acid deposition also originates outside Singapore due to the activities conducted by nearby countries. For example, acid deposition originates from Indonesia due to forest fires which leads to haze.

Distillation. Impure water is evaporated, and pure water condenses on the plastic foil. The water then drips down into the cup collecting the pure water that is consumable.

Or we can just purchase water purifying equipment for hiking, like Ultraviolet Light Water Purifier. 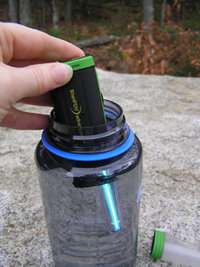 Desalination using reverse osmosis techniques is costly to maintain the condition of the technology used, and it requires a high-energy consumption. Places usually use this where they do not have natural resources of water. (Eg. Singapore.) If they have natural resources, cities will use other cheaper ways to purify water, such as distillation.

Desalination will cause environmental problems as well, upsetting the ecosystem, and affect marine life since water is needed to be pumped from the sea, and pipes may vacuum and kill the marine-organisms.

Water-soluble molecules would be polar compounds, due to similar bonding between water molecules being polar as well. The energy absorbed for bond breaking will be sufficiently compensated for the energy released from the bond formation between solute and solvent molecules.

Though a fat-soluble compound is often non-polar as fats are usually non-polar. This similarity in the polarity of the solute and solvent will result in sufficient energy for compensation provided by the bond formation, to support the bond breaking, making the reaction of solubility favourable.

The statement is incorrect. Global warming will upset the climate system and cause extreme weather. Some places will experience extreme heat waves, droughts, while other places will experience excessive precipitation and colder-than-before weather. Despite the image showing the people experiencing extreme cold weather and are in knee-deep snow, there is still global warming, and it is the cause of the extreme weather the people in the image are experiencing.

In the short run, the most serious situation is the bad air quality. The particles in the air will cause direct health problems such as respiratory problems.

Global warming has more drastic consequences, due to the rising sea levels caused by glacial retreat, and extreme climates. This will affect the survival of living organisms.

Depletion of ozone directly affects a certain area of the Earth. There are precautions then individual can take to prevent the UV rays from affecting us. Such as sunblock and sunscreen)

a: exothermic. We feel hot when we put our hands near the burning charcoal

b: endothermic. We feel a cooling sensation when the water evaporates from our skin.

c: endothermic. Our hands feel cold when we put it near an ice cube.

Bond energy of products should be much lesser than the reactants, in order to release a large amount of energy.

Temperature is really just a measure of the vibrational energy of the particles. It can be directly measured using the Fahrenheit, Celsius and Kelvin scale.

For heat, it is a measure of the difference in temperature. For example, we submerge our right hand into ice water and left hand into hot water. Then remove both hands from the water and submerge both in lukewarm water. The right hand will feel cold while the left hand will feel hot. This is due to the difference in temperature. a: An octane number of 98 means a knocking characteristics of 98% isooctane and 2% heptane.

I learnt about how ozone is being formed and depleted at the same rate, giving rise to its steady state. The ozone layer helps to protect us from the harmful ultraviolet rays from the sun, which might bring about health problems such as skin cancer. I also found out about the 3 different types of UV radiation, UV-A, UV-B and UV-C.

Majority of the ozone in the atmosphere exists in the stratosphere.

Ozone in the troposphere is harmful to man.

Red has the greatest wavelength, which corresponds to lowest energy.

UV-C is the most harmful among UV-A, UV-B and UV-C.

Check Out Our History!